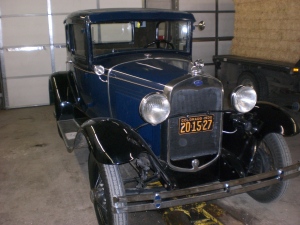 It’s been a busy late winter and spring here at the shop.  During that time I’ve added a couple of vehicles to the ever-growing fleet.   This one is a 1930 Ford Model A Deluxe Coupe.   I’d been looking for a Model A for some time, and heard about this one through a friend of a friend.  It had been restored sometime during the 1970s by the father of the seller.  She inherited it, but was unable to drive it, so it sat in her garage for the last 10 years.  After hauling it home I performed a complete service and tune on it.  Nothing sounds as wonderful as an old 4 banger Ford idling.  Thunka, Thunka, Thunka!

After the Model T’s were discontinued in 1927, the American public anxiously awaited the unveiling of the “New Ford” during the period that the factories were tooling up for Model A production.  Model A Fords were manufactured from 1928 through 1931.  Although all Model A’s were virtually identical mechanically, the styling was updated beginning with the 1930 model year.  It differed from the 1928-29 cars with the most recognizable features being the radiator, which became more upright and rectangular and the wheel size being changed from 21″ to 19″.  It was thought that the 1930-31 cars looked more modern.

I especially like this particular car because it has the stock trunk instead of a rumble seat.  Hopefully this summer we’ll manage to take a few weekend trips in this great old car! 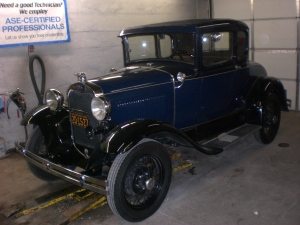